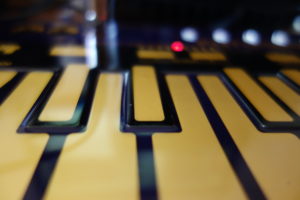 I bought this touch capacitance keyboard, a keyboard similar in style to some on the Buchla systems, in 2017, and I loved it, but immediately ran into problems, which had me frustrated and looking for answers. The main thrust was that some midi devices were not picking up the output from the midi output. It seemed as though if I plugged it directly into a synth, everything was fine, but if I plugged it into my MPC or my midi box, no messages would be picked up. This inconsistency, and the fact that Jared at Future Retro didn’t know what the solution was back in 2017, caused me to have to work around the issue, by routing everything first through my BCR2000, which picked up the signals. This was a pain in my ass for a number of reasons, with the extra cabling and delay causing annoyance and headaches.

So a few weeks ago, I had mentioned this issue to someone and they suggested I contact the manufacturer again, and when I did, there was an answer to the problem. According to Future Retro, ”

“[T]he MIDI buffer IC in the 512 does not provide enough current drive to control all MIDI devices out there in the world.”

So it was underpowered, but worked well enough so that some things didn’t show the issue during the testing phase. Further, he writes that,

“This IC can be replaced with a different part which should resolve the issue.”

Yes! And,  the solution is that,

I ordered the part online for a few cents and then had a local tech do the replacement, as it is very tiny and this is a very expensive instrument. And what do you know, it’s being picked up by the MPC now. It’s a shame that the MPC might soon get retired, but it’s great to know that I shouldn’t have this problem in the future with any other devices. Now that this is seemingly fixed, I’ve made the setup much more compact and eliminated a 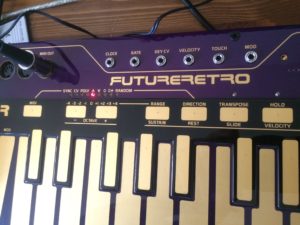 lot of overhead, and now won’t hesitate at all to use many of the arp, sequence, and chord features of this controller. And it should eliminate other issues. like the delayed values being transmitted after having clock go through two devices to get to it and notes and other midi data having to go though two devices to get back to the sequencer.