The Airbase99 is a drum module from electronic drum maker Jomox released sometime around the early 2000s as the successor to its first machine, the classic XBase09. It has an analog kick drum, snare, and high and low toms. For the other instruments it uses its own samples and those from the 808, 909, and CR78, which are then fed through an analog, reversible VCA for shaping. This is the oldest machine in my rig, and even though I have thought about getting another drum machine or module, this machine with its individual outputs continues to inspire me, and also, I just don’t want to spend the money on a new drum machine. But if you know my blog, you know that this entry is not about my fandom of this drum module, but about a far more esoteric quest: to nail down the tuning for the kick drum so I can play tuned kick drums like I would on a bass synth. But that has always proved to be a difficult task, as I will explain.

The kick drum on this machine is great and is capable of a lot of timbres, and in conjunction with the LFO, offers a wide range of tonal and rhythmic choices, but one thing has always vexed me: at certain times when I’m using a kick with a long release, one where the harmonic content is especially relevant, I noticed that it would often be sharp or flat from what I had initially programmed it to be. I made a few charts mapping out approximate control change values that corresponded to notes. The 3 octave range goes from about B0 or 30.87Hz up to A3 or 220Hz, with 255 values to choose from. From these 255 values you can derive 35 notes, but because it’s analog, the divisions aren’t even, and as you ascend up to 255, the gap between the notes gets larger. For example, an approximate value for E2 is 069 and for F2 it is 075, which is a gap of 6. But at E3 (175) and F3 (188), the gap has already increased to 13, so the only way to figure out what value corresponds to what note is by testing with a tuner.

So I did this and came up with a chart that mapped the machine values (0-255) to note values (B0 through A3) to control change values (0-127) to control the pitch of the kick drum in real time. As you might have noticed, a greater range is available on the machine than is available with CC messages, so for E2, whose value is approximately 069, I have to go up to 070 or down to 068 since I can only send 34 or 35 as control change values. And this worked for a while, as I wasn’t doing a lot of tracks where I wanted to tune the kick during the song, but now that I’ve been making drum and bass, I have gone back to using this technique, but kept running into tuning problems. So I began some basic research.

At first I tested only two notes, A1 and F1, and I got a wide range of values based on how long the machine had been on. Within the first hour to hour and a half, the notes are very flat, but after it stabilizes it stays relatively in-tune. However, the pitch continues to rise throughout the session, and after about 2 hours it rises four values an hour. So at 2 hours for note F1, the value 17 is about -14 cents flat but by 5 hours this same value is +2 cents sharp. In long sessions nearing eight hours or more, the value actually becomes 16. So I did the best I could and averaged the times after around 2 hours to 6 hours and picked the values that were closest to a note at the time. I came up with a charts that look like this: 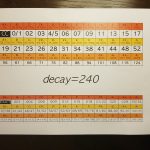 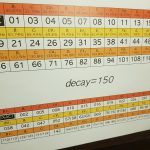 This took quite an effort of a few weeks of tables and spreadsheets just to see if I could figure out exact values that corresponded to notes so that I could use the kick drum as a bass instrument, and as it turns out, I can’t fully map out the values, due to the lesser resolution of 0-127 to represent 256 values and because the circuit that generates the kick drum is analog, and as far as I can tell, continues to rise in pitch as long as the machine is powered on, i.e. the hotter it gets. Additionally, higher kick drum pitches tend to go further out of tune faster than the lower kick values, so the top notes are essentially unusable. In fact, there is a semitone setting on the kick drum which supposedly tunes notes on a semitone scale instead of a linear scale, but it doesn’t attempt anything higher than around F3 or 175Hz as it becomes too unstable to accurately map. Due to these factors, I try to work between 2 and 6 hours to have a reasonable expectation that the notes I send will not be too sharp or flat and just do the best I can with what I have. If it becomes problematic I have other synthesizers that I can use to generate or supplement the kicks on the Airbase.

One thing I’ve embraced with analog technology (and with performing live in general) is that things aren’t going to be perfect, and that’s ok, audiences may not even realize it’s live if everything is too perfect. This tuning issue was really annoying me though and I’m glad I at least did the research to find out what I know or don’t know, and the limits I’m presented with and work around them. One cool thing about really discovering an instrument is that you begin to find areas that the people who built it might not even know about, the fuzzy edges, and these are something I’m always searching for.