This post is more for me to document what I’ve been doing, and contains a lot of esoteric and germane-only-to-me information, but maybe there’s some information people out there might find useful as well, so here’s my basic setup for getting pattern creation going on the TB-3. Also at the end, I’ve linked my presets for the BCR2000 to control most of the values on the machine. For reference, brackets around a button means to hold it, otherwise it’s a press 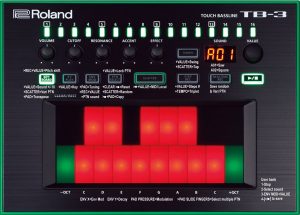 only. I like to use lock mode which has a bit of a different workflow,  so I start with that, otherwise any pattern you are working on gets overwritten by default. When you use lock mode, just make sure to press REALTIME REC when switching between modes so that you don’t lose what you’ve been working on.  Someone on the internet also made this overlay which is helpful as well.

This is sort of how I get the creative juices going, create a few patterns, make variations of them, and then start modifying those. If you go ahead and choose 32 steps, this gives you more random phrases to choose from.

Problems to Iron out

Here’s where it gets kind of workshop-y and relevant only to me, but I’ve managed to solve almost all the problems I had externally controlling the machine. I recently added more time between the 11 sysex calls I use to recall parameters in case any data was being cut off, as it was in some earlier iterations of my midi parameter request sequence. Interestingly I think the CTRLR panel sends all the sysex parameters simultaneously over USB midi, so it could be possible to do it that way from your computer, but I just use the MPC2500.

SOLVED: If a phrase ends without a 0 value for slide, notes can hang. Sending CC102 & CC103 with values of 0 after the offending TB part seems to address the issue.

SOLVED: This seems to be due to stuck notes. Following the procedure to avoid stuck notes (above) seems to fix it.

SOLVED: I found that I was missing a section of the parameters that was supposed to be being sent. Everything started to work once I restore that section. In the full set, CK seemed to still have problems loading properly even after the sysex parameters were verified, but it turns out the problem was again stuck notes. Once the stuck notes problem and missing sysex section problems were solved, this problem disappeared.

SEMI-SOLVED: The only way to avoid this issue is to test to see if it plays back properly when recorded. If the problem seems to be slide-related, try turning off slide on the last step and re-recording. If that doesn’t work, the only solution is to play the patterns directly on the machine. However, most patterns seem to be largely played back as desired, only towards the outer range of possibilities do problems appear.

I have reached a pretty good stage of the live setup which I hope will be stable for a while. The process of saving patterns and sounds to midi has taken some trial and error, but there have been no “deal-breakers” to this point. Accessing all the sound parameters live is also possible with an external device like a BCR2000, and to be honest if I couldn’t adjust and save these values I would probably not be able to use it in a serious setup, but as it is, this synth is a diamond in the rough. Sometimes patches are at different levels but I found I don’t have to adjust the main volume, I can either raise or lower the individual levels on the TB-3 (preferable though more complicated) or adjust the preamp level (easier). The level is quite hot so I keep it at about 3 o’clock so that I have a little headroom to get loud if I want. And if you just want that “classic” acid sound, pick preset A01 or A02 and tweak away, as it is actually one of the closest emulations out there based on videos I’ve seen. This has been a really fun machine to sound design on and now I use it in almost every track! And as promised, here are some links to my TB-3 BCR2000 presets in BCR format: