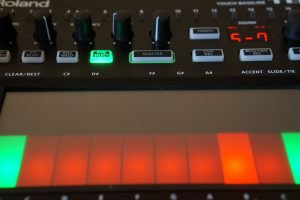 I finally went and bought a Roland Aira TB-3, for a number of reasons. First, I’ve been wanting a dedicated acid machine for quite a while since I sold my FutureRetro 777, but I wanted one updated for modern production. Another thing I absolutely had to have: patch memory. Almost none of the currently available machines have that capability, including the TB-03 and TT-303. There are some vintage machines available with patch memory but I really didn’t want to go that route. I’d heard the sound of the TB-3 and I liked it, so the choice was easy: Roland Touch Bassline TB-3.

It’s not always clear with Roland’s documentation what things mean, and  integrating it into my system proved more difficult than I had expected. In the context of the TB-3, there are two main components: sounds and patterns. A “sound” is a “patch” or sound program and refers to the synth parameters, while a “pattern” is a series of notes, gates, slides & accents that form a sequence. Patterns can be saved into 8 banks of 8, and can be saved to a computer. Sounds can be saved to one of the new 16 user slots . Roland provides no documented way to save patches on your computer, but I did manage to find an undocumented way. Here are some more discoveries I made that might help you.

In a live context, i don’t really like to use a machine’s internal sequencer or arpeggiator because they almost inevitably start out of time or fail to sync when they’re triggered. In the TB-3’s case, the sequencer ALWAYS runs and I would have to select patterns manually live, which is not something I wanted to have to remember to do at every live show. So what I do is just record the arp or sequence’s midi information to a sequencer, turn off the TB-3’s internal sequencer, switch to an empty pattern, and then play the information from my main sequencer. Here’s how I did it:

Now you can use the TB-3’s internal sequencer to make a sequence, play it into your sequencer, and bypass the TB-3 internal sequencer with no loss of information. Additionally, there is no need to overwrite patterns you want to keep using this method.

Time to Have Fun

Now that we can control the machine externally, go to any pattern, and press PTN SELECT [hold] then press SCATTER to randomize the note pattern and KEYBOARD [hold] then SCATTER to randomize the accents, glides, and octaves. If you press REALTIME REC button in between switching from PTN SELECT to KEYBOARD mode, it won’t erase and start over. Save the pattern by pressing REALTIME REC or simply play the sequence into your sequencer and play it back from there.  No need to back up patterns this way!

Check out this document for the rest of the cheat codes. http://airainfo.org/files/tb-3_cheatsheet.pdf